The COVID-19 pandemic has hit both public health and the economy hard. Lucky companies have gone fully remote almost overnight, while less fortunate have closed their doors for now.

So how profound has this impact been on regular businesses? And how do CFOs and founders see the future for their companies?

We wanted to know whether this crisis was a stumbling block along the way, or a “Stop” sign for growing businesses.

To find out, we polled the expert members of the CFO Connect community. These are finance leaders and business strategists from modern European and American companies.

Here are the key details and methodology of this CFO poll:

The survey was split into two sections: open and closed questions. We’ll look at some of the most interesting responses to our open questions shortly. But first, let’s explore the findings of our four key closed questions.

1. The present: companies are struggling

First, we need to know how companies have been impacted since the virus began. Significant business disruptions began (for the most part) in March 2020. 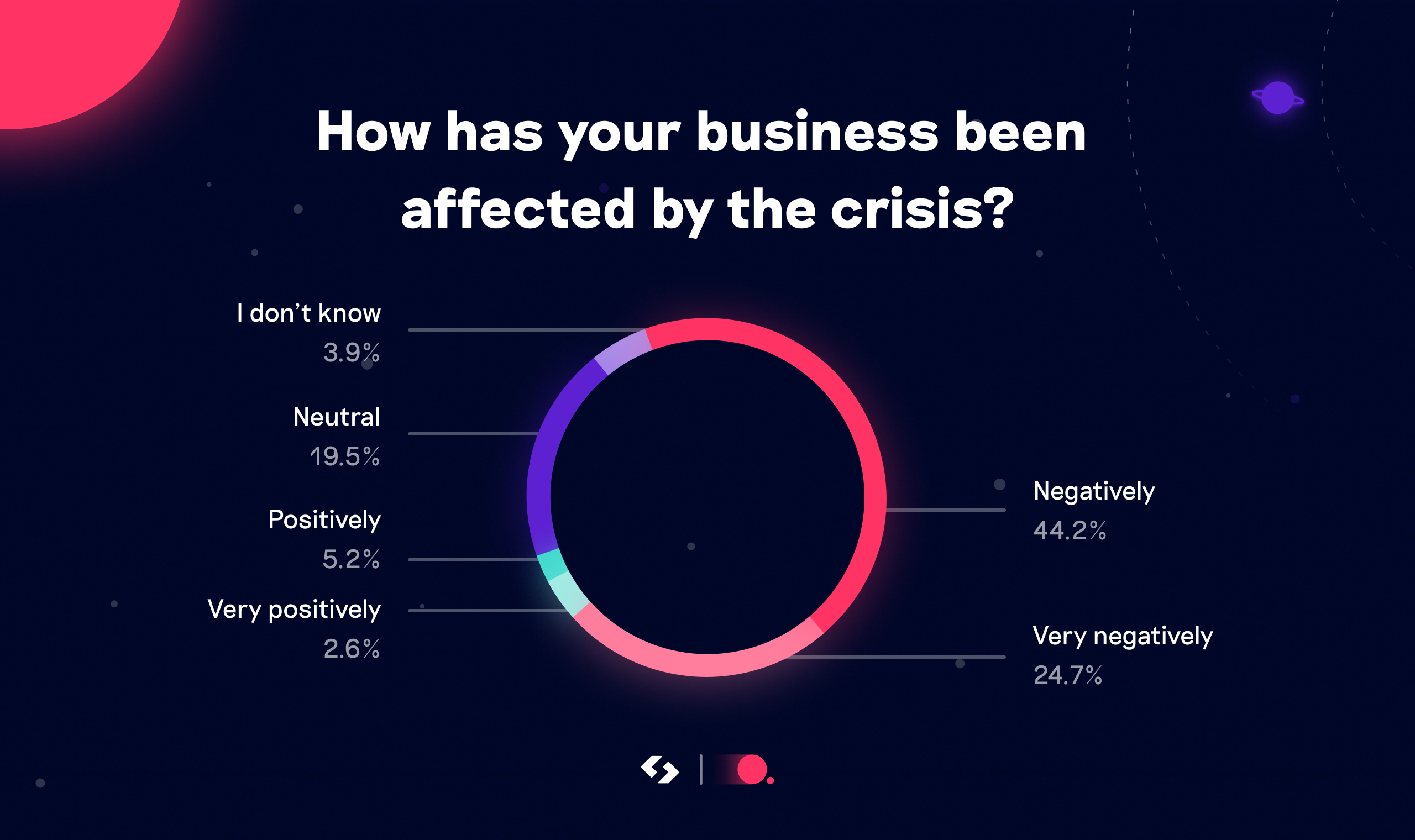 Clearly, businesses are struggling. 68.9% of survey respondents felt that their companies were affected either negatively or very negatively.

Which is probably no surprise to most readers. At best in most cases, the novel coronavirus forced companies to adapt and update protocols. Any change takes time to implement, and will slow productivity.

And in many cases, the virus directly reduced sales - either by disrupting whole industries (including travel and events), or by limiting client budgets.

Famously, a select few industries have seen revenue or productivity increase during the pandemic period. Video conferencing tool Zoom became a household name (and a verb) with the increase in remote work and socializing. And Amazon’s sales earnings skyrocketed, even if its profit margins decreased substantially.

Some pizza chains also seem to be thriving. And live streaming platforms have exploded in popularity.

The vast majority of our survey respondents have not had the same happy outcome. Only 7.8% felt that the crisis has been positive or very positive for their business.

Lastly, it’s worth noting that nearly 20% of respondents described the virus’ impact as neutral. This doesn’t mean that the impact was uncertain - 3.9% responded I don’t know. Instead, 1 in 5 respondents felt that the pandemic had not had a significant impact on the business.

That number may come as a surprise, and many will feel that it’s close to a positive outcome. Given the current circumstances, perhaps it is.

2. The future: relief in sight for some

If the impact on most businesses has been negative, those companies are likely also bracing for a rough future. Or perhaps finance leaders feel that the worst is behind them, and that recovery is on the way? 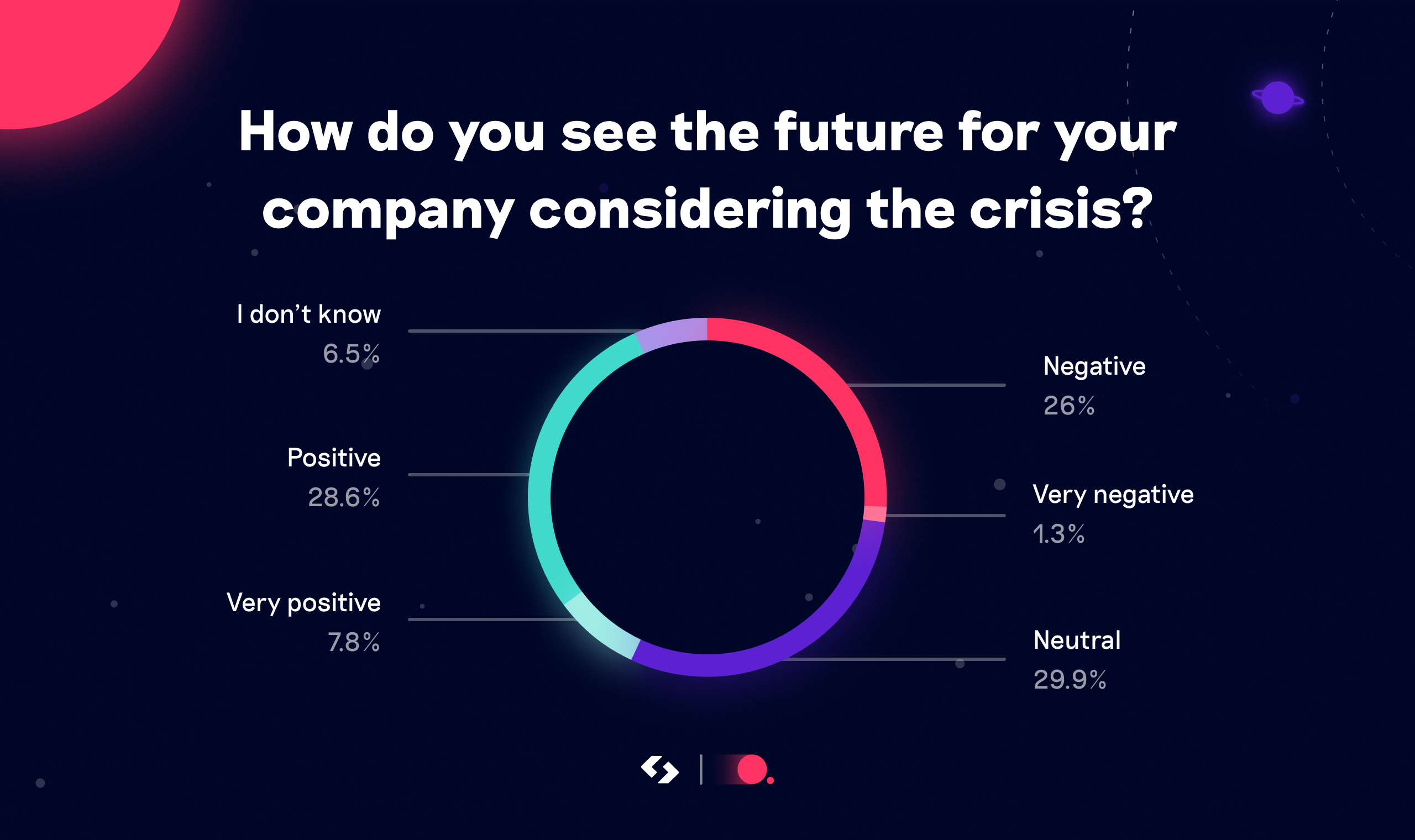 As we can see, the future looks brighter than the past for many finance leaders. Whereas we saw 68.9% negative responses to our first question, only 27.3% said the same about their company’s future.

36.4% have a positive or very positive outlook on the future. And almost a further 30% have a neutral outlook.

Interestingly, only 6.5% chose to respond I don’t know. In early coronavirus polls and virtual meetups, we found that finance leaders were concerned about their ability to create financial forecasts. Planning needs to be revisited every time new information arises, which was proving difficult for finance teams.

Judging from our poll, finance leaders have benefited from a few months of adjustment. They feel capable of projecting the future, and they understand their key metrics and drivers to keep the company in business.

So while more than a quarter of respondents do see negative results on the horizon, this is a vast improvement on what we might expect from simply looking at early impacts.

3. The response: what businesses need to survive

Our third key question asked what help or improvements businesses need in order to survive. 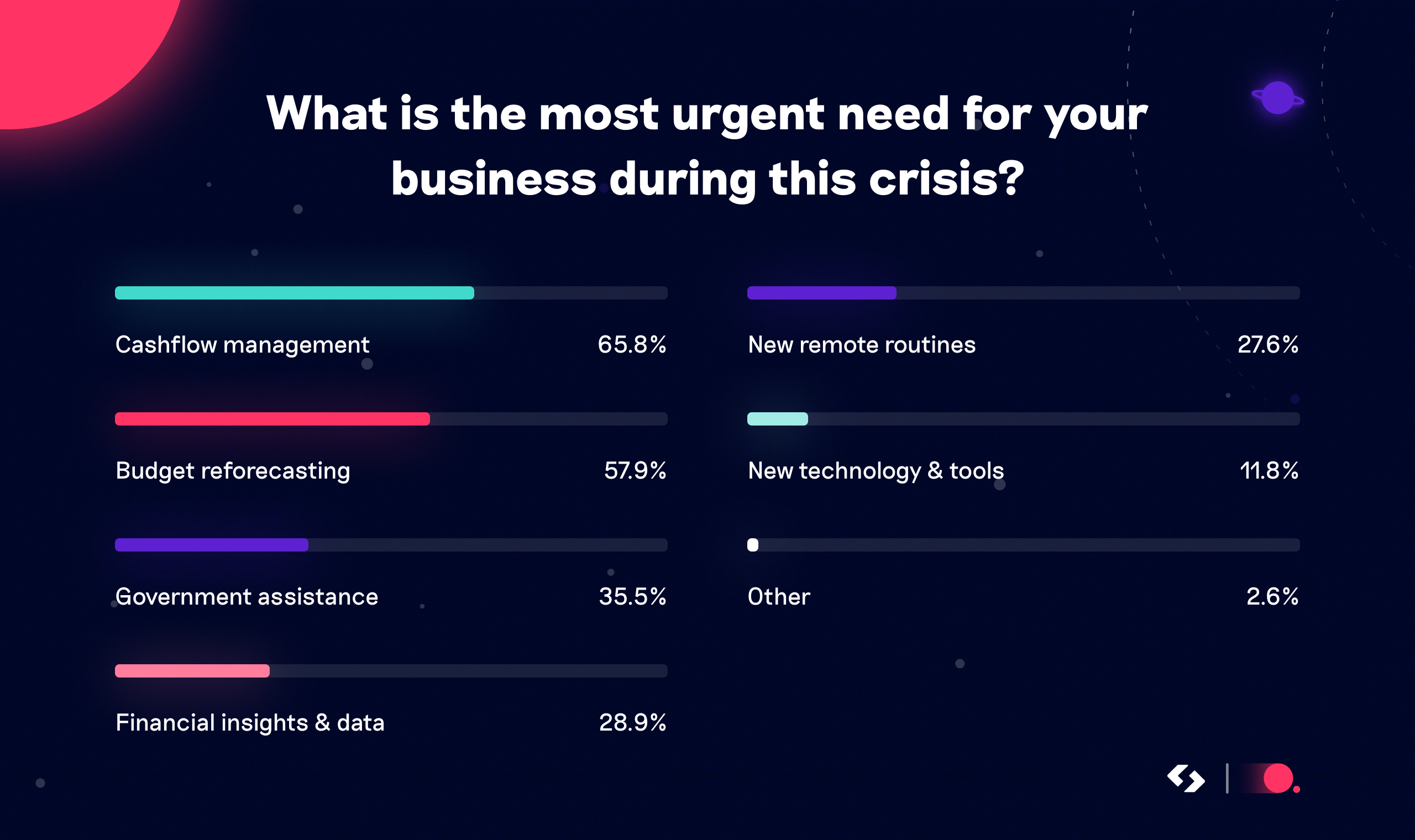 As we’ve seen time and time again over these past few months, cash is the biggest concern for finance leaders at present. Specifically, companies need ways to optimize cash coming in, and minimize what’s going out.

This will likely lead to budget cuts almost everywhere. And companies without clear processes to control spend have had to adapt quickly.

As mentioned above, budget forecasts have also been a fixture for finance teams. Every news update, lockdown extension, and government assistance program changes the company’s future. And with no clear end to pandemic in sight, FP&A teams are crafting forecasts for best and worst case scenarios, and everything in between.

Perhaps interestingly, new remote routines and updated tools are not given the same priority during this time. This suggests that finance teams were relatively remote-prepared before this crisis hit. It also may show that most tools have performed well in the new environment.

But we still see 39.4% of companies raising one of these as their most urgent concern at present. This does show that, while most finance teams have adopted more modern ways of working - either through choice or necessity - plenty still rely on processes that don’t suit the times.

Since we know that cash is such a key focus for most, we wanted to know how companies plan to make theirs go further. 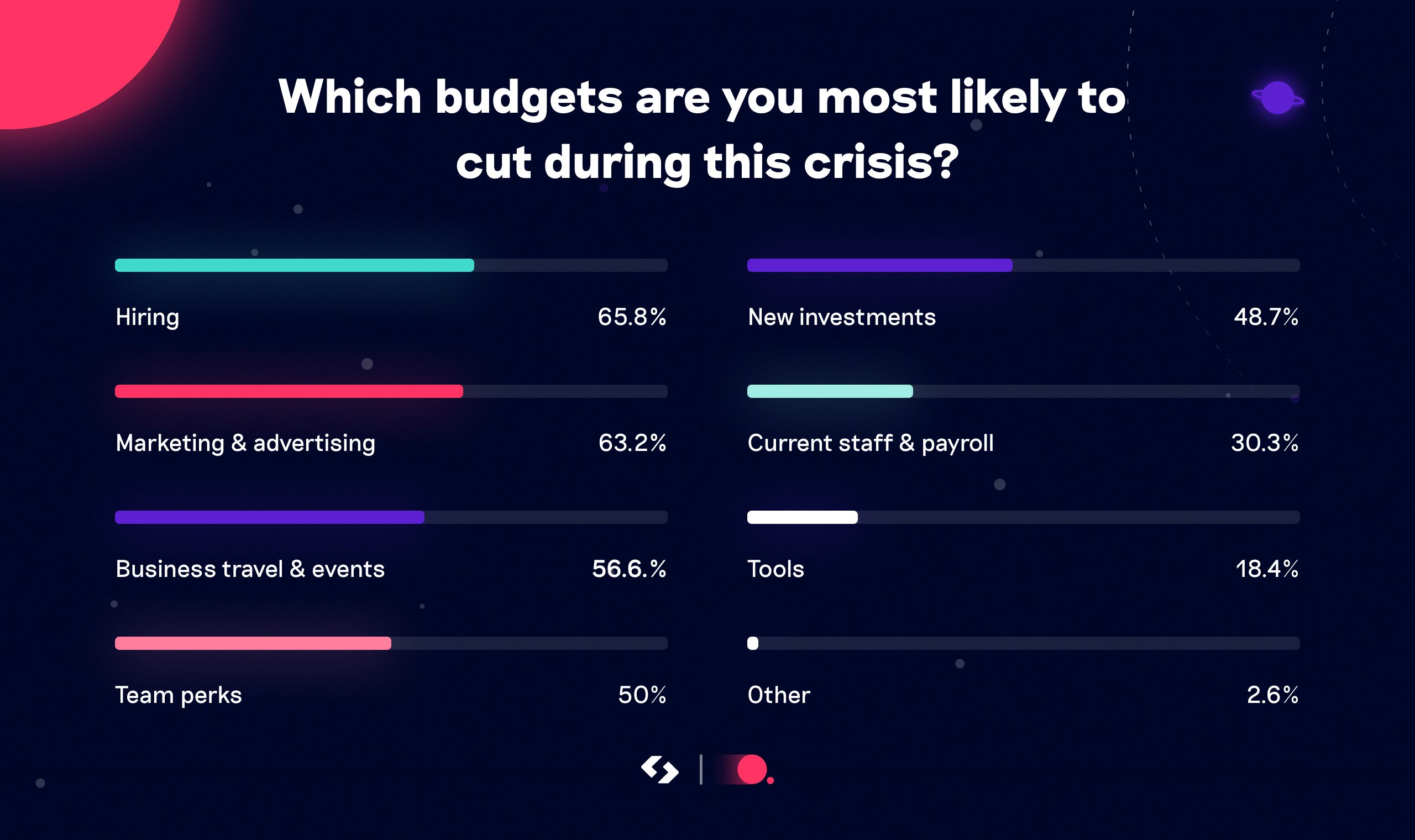 Perhaps obviously, new hiring came in first. Nearly 66% of respondents have or will reduce hiring budgets as a result of the crisis. With offices under lockdown and money tight, it’s unlikely that companies will want to add to their workforces during this period.

We’ve also seen high profile layoffs in a range of industries, and even where businesses haven’t been impacted terribly, it seems prudent to hold steady for the time being.

Layoffs are also a real likelihood for just over 30% of the companies polled. This suggests that the current government furlough schemes in place in most of the countries polled won’t be enough to sustain businesses.

Other obvious candidates for reductions include business travel & events, and team perks. Travel is virtually impossible in many countries, and the vast majority of conferences and business events have been cancelled.

It is perhaps interesting, then, that more finance leaders felt they would cut marketing and advertising than business travel. We know that advertising has been hit hard by the virus - television advertising has lost $12 billion in the US, and spend is down by 40% in the UK, from one report.

And yet, consumers are online more than ever, and online spending has increased. So it’s at least conceivable that advertising would continue to be important.

The survey also invited respondents to give open answers to several further questions. Here are the most interesting results from these.

What are your biggest challenges in adjusting to the new situation?

Answers to this question included several common themes, including cash, uncertainty about the future, (re)forecasting, and funding.

Several respondents also went into the challenges of maintaining growth despite other financial pressures. Many felt it was hard to ensure keep sales coming in, and finance leaders were working hard to understand their companies’ sales processes more fully.

Are you considering any support offered by the state?

All but 13 of our respondent companies do already receive support from the state. And most of those that aren’t currently, are considering applying for aid.

What help/expertise are you lacking right now that would help you in the current situation?

Again, we saw several recurring key themes in the responses to this question. The most common included “resources” (mainly financial), “HR/Legal skills,” and “tools.”

A challenging climate for finance teams

Overall, this survey highlights just how difficult doing business has been over this initial period. While many companies have hit significant stumbling blocks during this period, finance leaders are still largely optimistic about what the future holds.

CFOs, founders, and finance managers are rebuilding financial models at a furious rate, with no clear idea of what recovery will look like, and when it might come.

One thing is certain: an end to the current climate can’t come soon enough for most businesses. 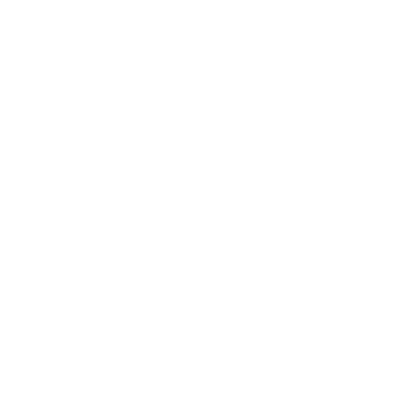